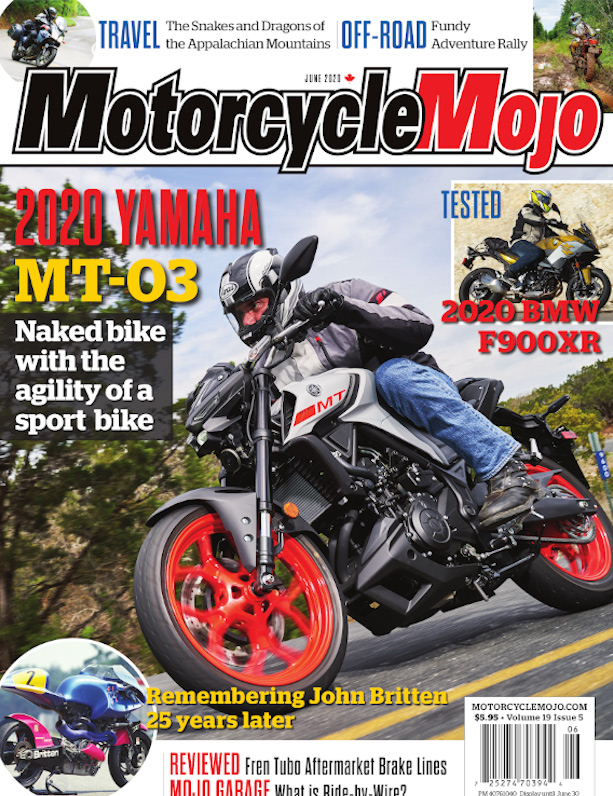 Our June issue features the BMW F900XR, which handles like a sport bike with an upright seating position. Also on deck is Yamaha’s brand-new MT-03, a bike created after the company stripped the YZF-R3 of its bodywork to fashion this nimble naked bike. Other features in this issue include many of the roads in the Appalachian Mountains that are named after serpents; an article on motorcycle designer genius John Britten – how his mind worked and his avant-garde motorcycles; and the gathering of like-minded dual-sport riders at the Fundy Adventure Rally. 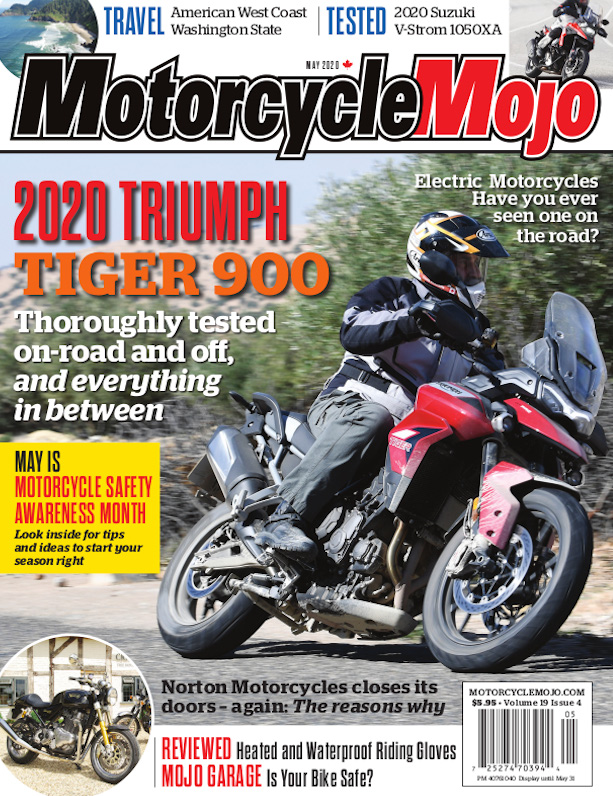 Our first feature article in our May issue is that of the 2020 Triumph Tiger 900. Costa Mouzouris tested the GT and Rally models by putting them through their paces riding on pavement, gravel and off-road. Also in this issue is a test of the all-new 2020 Suzuki V-Strom 1050XA. David G. Williams takes us on a loosely planned ride in search of the perfect Old Fashioned down the coasts of Oregon and California. Britain’s Norton Motorcycles has closed its doors once again. Alan Cathcart reports on what happened to the British motorcycle manufacturer. This is just a snippet of what’s in our May 2020 issue. 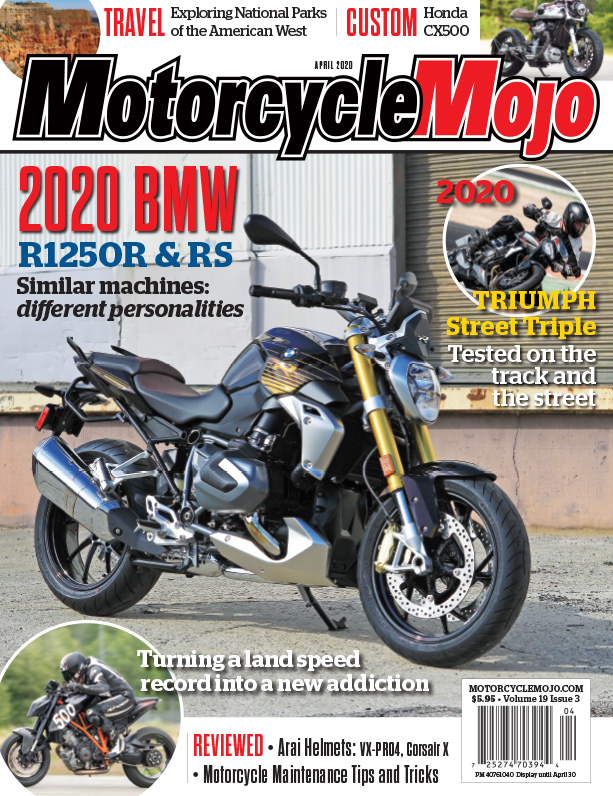 This month Jamie Elvidge brings us her take on both the 2020 BMW R1250R naked roadster and the R1250RS sport-touring bike. She gushes over these two bikes, which she says are similar machines with different personalities. Jamie had a tough time finding fault with either one, but she does have her favourite.

Also in this issue, Costa Mouzouris sent us his account of the 2020 Triumph Street Triple RS from the press launch at Cartagena, Spain, where he was able to test the bike on the road and on the track. Mouzouris was quite impressed with the 2020 version.

Shane Scott is no stranger to danger and loves speed, as is evident by his racing experiences in many forms of two-wheel competition. He’s even taken on the mountain at the Pikes Peak International Hill Climb. But attempting a land speed record was still lingering on his to-do list. Read about his challenges and experiences in adding another accomplishment to his resumé of speed.

Our travel feature this issue comes from Curtis and Karen Nickel. When medical complications threatened to quash their plans of a motorcycle trip they resorted to Plan B and, against doctor’s advice, proved that a good motorcycle ride really is the best medicine.

There is no question that Honda’s CX500 was a strange animal in comparison to the other machines that Honda has produced. That didn’t deter one builder from taking on the CX500 and making it his own. Our custom feature showcases Bob Klemenchuk’s exquisite creation.

All this and so much more in the April 2020 issue of Motorcycle Mojo magazine. 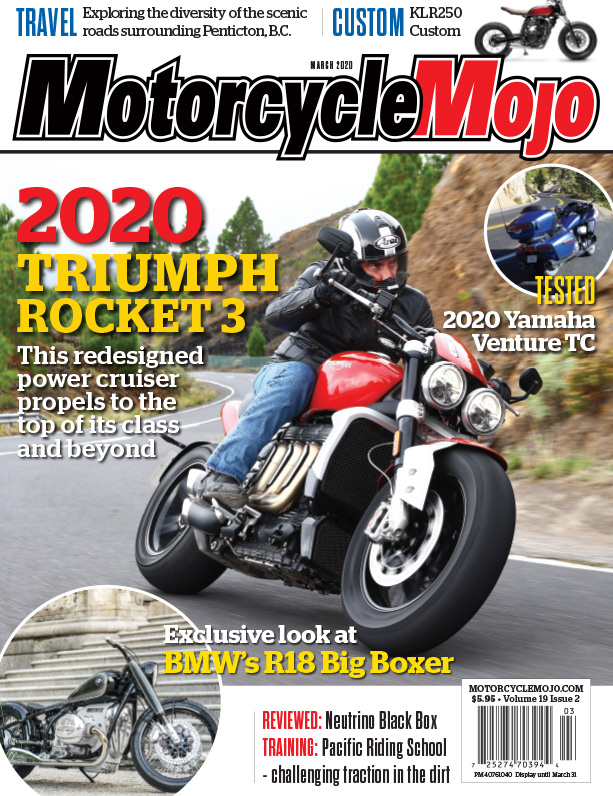 Triumph Motorcycles recently showcased its 2020 Rocket 3 R and GT at a press launch in Tenerife, Canary Islands, and Costa Mouzouris brings you his first impressions of these two power cruisers. He was expecting the massive amounts of horsepower and torque that the huge 2,500 cc in-line three-cylinder engine produces, but was most impressed at how well the updated Rocket 3 handles serpentine roads.

We also include a report from Jamie Elvidge, who tested Yamaha’s 2020 Venture TC in the canyons and highways of Southern California. In addition to the Venture TC’s remarkable touring comfort and storage, it also handles low-speed manoeuvres quite well for such a large bike. But as she observes, the big touring bike isn’t without its weaknesses.

Our travel feature this issue is of the Penticton, B.C., area. This beautiful city became Emily Roberts’ home base for a multi-day motorcycle ride and she was thoroughly impressed with the diversity of terrain and scenery that the Southern Interior of B.C. offers.

On the custom front, Greg Williams takes a look at a build by a hobby motorcycle customizer who transformed a tired 1994 Kawasaki KLR250 into a modern road burner that looks like it would be way too much fun to ride on the streets.

David G. Williams takes a look at a few backyard builders. They aren’t mechanics or professional builders, but they do have a desire to create or modify a motorcycle of their own and proudly ride it down the road. 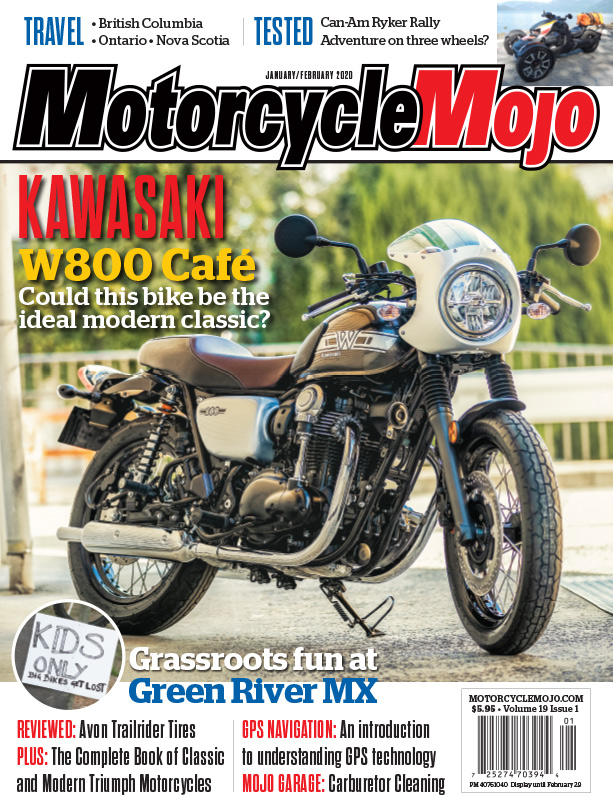 Our January/February 2020 issue offers three travel features from across the country. Let’s begin on the West Coast, where Brent Larose finally reaches his destination on the west coast of Vancouver Island before making his way northeast to the town of Port Hardy and a 16-hour ferry ride to Prince Rupert. Brent finally makes it home to Calgary, but not without some trials and tribulations.

Our next travel story takes us to Central Canada and a multiple-loop ride in the Ontario Highlands. This area of Central Ontario is arguably the best riding the province has to offer. John Lewis recounts his ride on roads that twist around massive rock outcroppings of the Canadian Shield and more than 1,000 lakes.

Next, it’s off to Canada’s East Coast and Ron Keys’ tale of the fantastic roads along Nova Scotia’s Bay of Fundy coast, where you will meet the friendliest people.

On the testing front, Jamie Elvidge gives us the lowdown on the Kawasaki W800 Café. She includes a bit of history on the café racer category and attempts to mimic the reason that style of motorcycle exists in the first place.

In addition, David G. Williams’ ears perked up when he heard Can-Am’s claims that its Ryker Rally edition will “take your ride off of the pavement and unleash it on even more playgrounds.” With that in mind, he decided to see how well the Ryker Rally performs during a wild camping trip in rural British Columbia. As it turns out, there were some lessons to be learned! 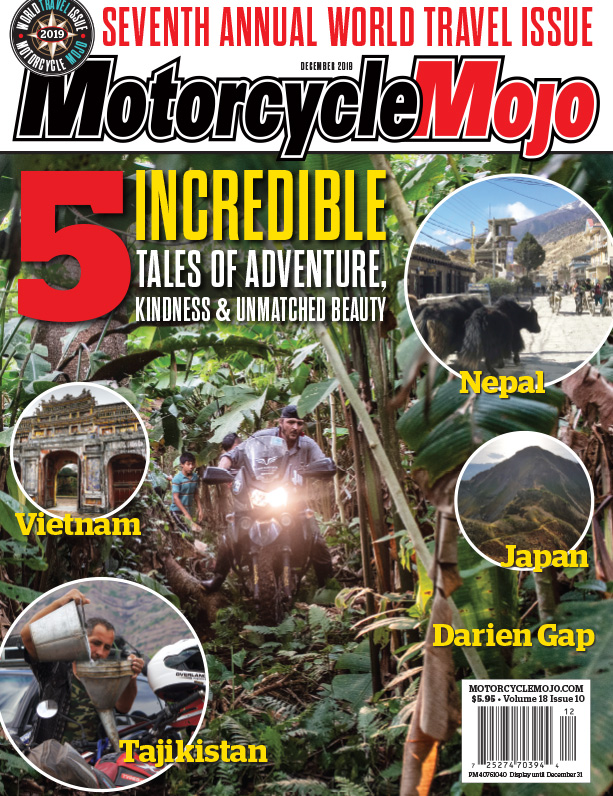 Here we are again with our annual world travel issue! This is our seventh edition, and it’s filled with stories of adventure and exceptional travel experiences from various parts of the world.

Paddy Tyson sent in his account of riding in Tajikistan and his encounters with some of the very hospitable people of that country.

Next up is an article on the trials and tribulations of a multi-week vacation in Vietnam on rented scooters.
Our own Misti Hurst trekked to Nepal, but not to climb mountains; rather, she rode a couple of different motorcycles into the mountains. Her trip also helped to fund an orphanage and help destitute children in the region to gain a better life.

Shaun Hellmich ventured to Japan to ride around a few of the country’s islands and on those amazing roads. He explains that while there was a serious language barrier, he was able to get by without much of a problem.
By far the most harrowing account is the story of a small group of men who wanted to ride the length of the Americas overland in one go. They first had to leave the Arctic in winter in order to hack their way through one of the most dangerous places on earth – the Darien Gap. There’s a reason no one has done it before. It’s fascinating story you won’t want to miss.

I hope you enjoy this issue of Motorcycle Mojo magazine.